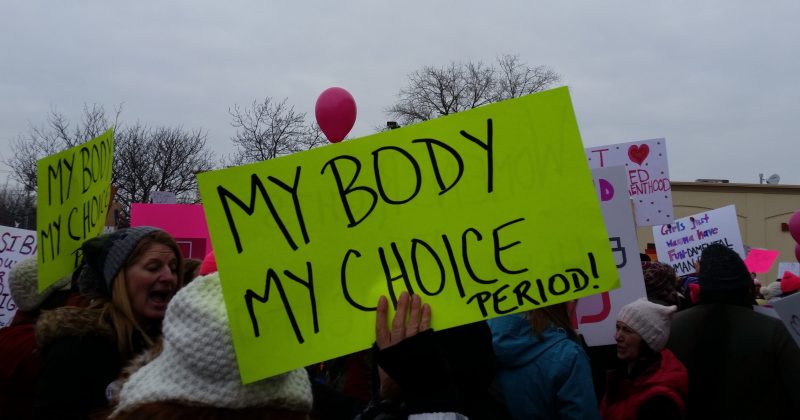 The 2-year-old and I attended a rally in support of Planned Parenthood in Albany last weekend. It was my first rally (except for the prayer vigil in town a few weeks ago). I didn’t know what to expect.

To be honest, I felt a little awkward. I never managed to meet up with my friends. The baby got a lot of attention, but I mostly didn’t know what to do with myself. So I just stood there and tried to take up space —  not hard to do with a baby on your back — and make the crowd look bigger.

I’m glad I went. I would go again. I’ve talked with a few different people about the phenomenon of large groups, and they have different rationales for their importance. One pointed out the impact of seeing a large number of people in one place for the same reason. Another talked about how the act of protesting changes the protesters. And everyone agreed on the need for sustained action.

There has been a lot written about why liberal protests don’t work: they are just a catharsis. They make everyone feel better, and then everyone goes home and goes about their daily lives. Detractors point to the Occupy Wall Street Movement as an example of liberal failure. I’m not sure it’s fair to characterize that movement as a failure, when we had a candidate like Bernie Sanders bringing so much national attention to many of the issues on their platform.

And there have been other protests that have brought real change: Selma, Stonewall, a huge number of protests against the Vietnam War.

The problem is that change comes slowly. Protests help to make the problems visible to those not directly affected.

I keep meaning to write about my top three causes, where I want to put my energy over the next several years, and I keep getting distracted by the barrage of bad news, by how many things need attention. But women’s rights, specifically women’s reproductive rights, has always been one of my causes. It was probably my first cause.

So it seems fitting that this was my first big rally.

I had a new-to-me experience today: Today I felt fear as a persecuted minority.

It is surreal to me to write that. I am a white, middle-class, Christian, straight, cis, property-owning, American-born woman. I’ve experience misogyny, sure. But I have never felt persecuted. I have the luxury of living an unexamined life if I so choose.

But today, I sat as fear washed over me. I did not feel safe.

Two major events combined to make me feel this fear.  First, reports from Russia that Putin has signed a bill that decriminalizes domestic violence. The details of this bill are chilling:

Russian President Vladimir Putin has signed off on a controversial law decriminalizing domestic violence as long as it does not happen more than once a year.

The new law makes the first offense of violence against “close persons” such as relatives or children an administrative offense, punishable by a 30,000 ruble fine ($500) or arrest for 15 days.

I drive by the Women’s Support Services office on a regular basis on my way into work. I used to volunteer for the 24-hour domestic violence hotline. I’ve heard the stories of women, in their own voices, late at night. I learned about Tracey Thurman, who, in 1984, successfully sued the Torrington, CT police (a town about a 30-minute drive from my house; I went there this week to have my teeth cleaned) for violating her civil rights for ignoring her reports of the harm her husband continually inflicted on her. I remember the work WSS did to advocate for a state statute to make strangulation a felony. The statute was enacted in 2008.

I know that Russia is not the United States. Not yet, anyway. And I know that there are plenty of countries in which women have a particularly hard time (oh wait! The United States is on that list!). Given the role Russia has played recently in our news cycles, and given our new president’s professed fondness for Putin, this hit close to home.

The second was the Republican Senators’ vote to silence Sen. Elizabeth Warren during the debate on the nomination of Jeff Sessions to the position of attorney general.

Sen. Warren was reading a letter written by Corretta Scott King, the widow of the Rev. Dr. Martin Luther King Jr., opposing the nomination of Jeff Session to a federal judgeship in 1986.

I write to express my sincere opposition to the confirmation of Jefferson B. Sessions as a federal district court judge for the Southern District of Alabama. My professional and personal roots in Alabama are deep and lasting. Anyone who has used the power of his office as United States Attorney to intimidate and chill the free exercise of the ballot by citizens should not be elevated to our courts. Mr. Sessions has used the awesome powers of his office in a shabby attempt to intimidate and frighten elderly black voters. For this reprehensible conduct, he should not be rewarded with a federal judgeship.

I regret that a long-standing commitment prevents me from appearing in person to testify against this nominee. However, I have attached a copy of my statement opposing Mr. Sessions’ confirmation and I request that my statement as well as this letter be made a part of the hearing record.

I do sincerely urge you to oppose the confirmation of Mr. Sessions.

After the Republicans voted to silence Sen. Warren, Sen. Tom Udall of New Mexico read King’s letter into the record. No one objected.

I feel that efforts are being made in diverse arenas to silence the voices of women.

I plan to attend a rally in Albany, NY, to support Planned Parenthood on Saturday. And I plan to keep writing.

I had the misfortune to read the remarks made by the current president at a luncheon in honor of Black History Month today.

In an attempt to scrub them from my brain, I thought I would share some information about Frances Ellen Watkins Harper, a 19th-century African American writer. I wrote a chapter of my thesis for my  master’s degree on her serialized novel, Trial and Triumph (1888-1889), so I hope you will indulge me quoting myself at times.

Born in Baltimore, Maryland, in 1825 to a free black mother, Frances Ellen Watkins spent the years after her mother’s death with her uncle, William J. Watkins, a minister and abolitionist. Little is known about Watkins’s father; some have speculated that he was a white man. She received a first-class education at her uncle’s school and worked as a seamstress and in a bookstore before joining the faculty of a school for free African Americans in Ohio in 1850. After three years of teaching, Watkins left education to begin her life’s work as a speaker, poet and activist for the equality and advancement of African Americans. In 1860 she married Fenton Harper and retired from public life. They had a daughter, Mary. After Fenton’s death in 1864, Harper returned to her speaking and writing. She was a member of the Underground Railroad, and after emancipation traveled extensively in the South. She joined a number of organizations of both African Americans and women, continuing to speak until she was eighty years old. During the course of her life, Harper produced at least eight volumes of poetry, one short story, three serialized novels, one full-length novel and numerous articles. Harper dedicated her life to the advancement of her race; as Foster says, “To Harper, literature was not separate from life. Her writing was but one of the ways in which she sought to live her convictions and to work for the betterment of the world within which she lived and the people with whom she identified” (135). Her commitment to a number of social causes—temperance, suffrage, civil rights—comes across in all of her writing, forcing her readers to recognize the intent of her work to shape society.1

Foster’s novel, Iola Leroy (1892), falls in the tragic mulatto genre: Iola, a mixed-race young woman, born free, who could “pass” as white, is sold into slavery after the death of her white father. Iola Leroy was one of the earliest novels written by an African American.

I chose the shorter, and earlier, Trial and Triumph for my study because the protagonist, a young African American woman named Annette, has aspirations of becoming a poet. I was interested in how 19th century women writers portrayed themselves — women writers — in their fiction.

In Trial and Triumph, Harper has her young poetess turn away from her writing to pursue “race work.”  Readers in the 19th century expected their literature not only to entertain, but also to uplift. There was supposed to be a moral purpose to the story. Harper embraced this trope and turned it to her purpose, using her writing to inspire pride, hope, and self-respect in her audience.

Noting that “The literature they read was mostly from the hands of white men who would paint them in any colors which suited their prejudices or predilections” (240), Harper shows her reading audience the importance of the text they hold—written by a black woman, a member of the traditionally voiceless—to the battle for social equality. By authoring their own texts, African Americans have the opportunity to shape the images displayed in popular culture.

Trial and Triumph is such an interesting text, for its blending of genre, for its African-izing of the common stereotypes of white women, and for its unflinchingly optimistic portrayal of the prospects of Black America.

Harper creates the character of Annette, who is both a poet and an activist, in part to argue that a race capable of contributing to the cultural tradition of its nation surely has the intellect to contribute to that nation’s political processes. Literature is concerned with the nature and state of humanity. It addresses moral, philosophical and political questions of human experience and examines the phenomenon of society. Harper’s work stands as testament to the humanity of her race and thus argues for the inclusion of African Americans, including African American women, in the political life of America.

Theme by Anders Noren — Up ↑